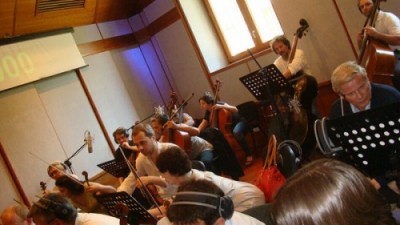 Sud Ovest records a company operating in the music recording field was born to offer musicians and producers a structure able to insure the maximum technical and artistic quality by carrying out all the steps, thanks to the experience built during 40 years of recording and production.
Our company’s organization permits to follow the musical project step by step in order to achieve a perfect final product, both technically and artistically speaking.

Our Music Supervising department offers to cinema, television and advertising productions a complete assistance in all the steps of Soundtracks production, from conception, to production, to mix, including all paperworks, contracts and copyright. Every step is coordinated by the Music supervisor. We also produce video clips, commercials and music films. The work team includes Music Composers, Music Consultants, Music Editors, audiovisual and publishing professionals and is able to offer the following services, professionally, quickly and with competitive prices.

The matured experience allows us to organize and record any type of musical project, from classical music to soundtracks and recording production. Our point of strength is the recording where the orchestra has a fundamental role, taking care of all the phases of the production such as, in the case of soundtracks, playbacks, preproduction with electronic instruments and rhythmic, copying, recording of the orchestra, contributing therefore to the safeguard and preserving of the musical quality.

Whenever we are asked to organize and realize a soundtrack or whatever musical project, we take care of the whole process, choosing the best musicians and soloists according to the composer’s needs.
This applies not only in Italy but also abroad.
In case of projects with orchestras, we can also arrange the recording in Sofia (Bulgaria) when, due to either economical or artistic aspects, it is suggested not to record in Italy.
We have been operating in Sofia since 1992 where we have recorded more than 300 soundtracks and other musical projects.
The July 2013 agreement with the Bulgarian National Radio and its symphonic orchestra allows us to have an orchestra which does not need to be introduced as existing since 60 years it is one of the most known in Europe. The symphonic orchestra is composed by 95 elements, the Big Band Orchestra, a 80 elements choir and treble voices. The technical quality is also very accurate as recording is done in the Auditorium of the Bulgarian National Radio which can contain as much as 200 musicians.
The Auditorium has a top of the art technical direction equipment.

Begins his career in Recording Studios in the 1975, taking care of projects for discography. In the 1980 he start his experience in the biggest italian recording studio, “Forum Studios” in Rome, where he approaches to music and soudntracks. In the 1986 he becomes technical manager in one of the most important italian publishing houses, “The Cam”, here between the many and relevant soundtracks he mixed soundtracks of : “Il Postino” of Luis Baclov, winner of an Oscar for best movie soundtrack. In the 1995 he founds the “Sud Ovest Records”, society that covers the organization and realization of movie soundtracks and much more. In 2009 founds, thanks to all this, the “Stone Recording Studio” He worked as Sound engineer with the biggest music composers: Ennio Morricone, Pino Donaggio, Carlo Siliotto, Luis Bacalov, Nicola Piovani, Andrea Guerra, Manuel De Sica, Leonard Rosenmann e Alexander Desplat and much more. Now he can claim over 600 soundtracks and numerous album and theather projects.

Gabriele is a young but experienced recording engineer. He started his career in 2006 working as an intern at Forum Music Village studios in Rome, while he was still attending a sound engineering course at APM school in Saluzzo. He took his sound engineer degree and after a few months he was running sessions as a Pro Tools operator/recordist.
He has gained a lot of experience in a wide variety of musical genres.
He has joined Sud Ovest Records in 2011 where he currently works both as an assistant and recording engineer. He has been fortunate enough to work with many great composers and musicians such as Ennio Morricone, Nicola Piovani, Alexandre Desplat, Pino Donaggio and many others.

Graduated at the Music Academy for Theatre and Music in Munich as oboist, he is regularly guest of the most prestigious orchestras in Germany. During the last 10 years, Slav Slavtchev recorded dozens of classical music CDs. The series of Haydn Symphonies with the Heidelberger Symphoniker received numerous international awards. 2011 Slav Slavtchev and the Manncheimer Mozartorchester were nominated for Grammy Award for the CD Antonio Salieri “Overtures & Ballet music’’. He is the founder and creative director of Sofia Record Factory”, established in 2013.

Giancarlo Russo is an Italian composer, producer and Music Supervisor.

He has been working professionally for over 25 years in cinema and entertainment industry, as a musician, arranger and producer, and as a Music Supervisor: music consulting and supervision, publishing, score editing, orchestral recordings and audio mix, production and post-production for television, cinema, advertising, events.

He has gained significant experience in the field of film production, participating in all the steps of production and specialized as coordinator of audio-video post-production teams.

He has extensive knowledge of international music catalogues and of publishing and synchronization contracts.

This website uses cookies profiling its own and other websites to serve you advertising in line with your preferences. By accessing any element beneath this banner, you agree to the use of cookies. More info